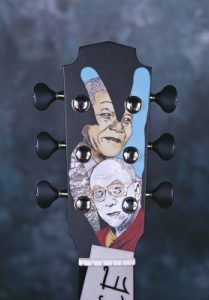 In 1997, He received Canada’s prestigious Saidye Bronfman Award For Excellence, the first and only instrument maker to be so honoured. He is also an elected fellow of the Royal Canadian Academy of the Arts, and included both in the University Of Toronto’s “Who’s Who In Canada” as well as the Encyclopedia of Music In Canada. Most recently he received the Estelle Klein (lifetime achievement) Award, from the Ontario Council of Folk Festivals.

In addition to building the instruments, Laskin uses them as “canvases” for his engraved inlay art. He is now internationally acknowledged as having single-handedly taken the tradition of musical instrument decoration beyond the purely decorative. For Laskin, the inlay medium has become a tool for communication, not merely embellishment.

To encourage the growth and public awareness of the luthier’s craft, he helped co-found in 1988 (and twice was President of) the Association of Stringed Instrument Artisans (A.S.I.A.), the international trade organization geared to professional builders and repairers of musical instruments. As president, in 1993, he authored the first Code Of Ethics for luthiers.

An additional but related hat Laskin wears is that of musician/songwriter/singer. For 40 years he has been a multi-instrumentalist performer of music, playing guitar, mandolin, Northumbrian smallpipes and concertina. He continues to give the rare concert at clubs and music festivals across Canada and the northern US. He has recorded four solo albums of original music — the first two on Stan Rogers’ Fogarty’s Cove label — as well as numerous others as a member of various bands. His songs have been recorded by other artists such as Pete Seeger and The Tannahil Weavers.

Laskin’s final hat is that of author. In October 2016 he published Grand Complications – 50 Guitars+50 Stories. In October, 2003 he published A Guitarmaker’s Canvas; The Inlay Art Of Grit Laskin. In 1996 he published his first novel, Angel Could Smell The Fire. His first published book however (1987) was a celebration and documenting of Toronto’s thriving and diverse community of professional musical instrument makers: The World Of Musical Instrument Makers; A Guided Tour. It was the first book in North America to document contemporary makers.